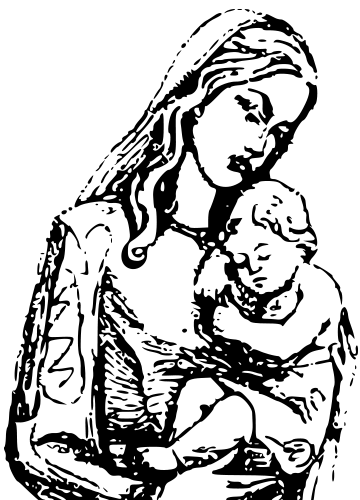 A GLANCE AT OUR HISTORY
The beginning of St. Mary Our Mother Parish dates back to 1865, the year the Civil War ended. In October of that year, a small wooden church building on the north side of Broad Street in the Village of Horseheads housed a congregation of fifty members and had a seating capacity of 250 persons. The church was named St. Mary’s and was a mission church of St. Peter and Paul Church in Elmira. Two years later land at the present site of the cemetery of St. Mary Our Mother was purchased. Then in 1869 St. Mary’s mission was given parish status and a resident pastor. The first rectory opened on Westlake Street and still stands as a house today. A second rectory was built in 1900 at 408 West Broad Street and in this same location a second and larger St. Mary’s Church was built to accommodate a growing congregation. It held its first Mass in January 1903. The congregation thrived here for more than fifty years, but would once again outgrow its facilities.

Following a capital campaign, Father Francis Reilly, the pastor, purchased an eight acre piece of land located between Westlake Street and Broad Street and adjoining land purchased eight years earlier for a cemetery. On this eight-acre property St. Mary’s school opened offering grades one, two and three and enrolling 125 students. The property came with two garages and a house, which would eventually be converted into a convent and named St. Joseph’s House to honor the Sisters of St. Joseph that came to staff the school. A second capital campaign resulted in the addition four more classrooms, a gymnasium, and a parish chapel to school building in 1961. Then the Administration-Rectory Center opened in its present location in 1965. The second church and second rectory were both closed with the completion of these structures in 1965, one hundred years after the founding of the parish. The parish now celebrated Masses in the Chapel inside the school building. It was at this time that the name of the parish changed from St. Mary’s to St. Mary Our Mother at the request of Father Bartholomew O’Brien, the current pastor.

A third capital campaign resulted in the building of a new church on the property between the school and the Administration-Rectory Center. The church was dedicated on November 10, 1979, and the school chapel was rededicated as a school and church hall, now called O’Brien Hall. An enclosed corridor connected the church to the school, giving easy access to classrooms and meeting rooms. A four-hundred-pound, steel cross rose eleven feet above the peak of the church, a visible sign of the Catholic faith to the surrounding area. A 3000-pound piece of solid, carved-out granite formed the baptismal font, inviting all to “come to the water.” Then two years later, the University of Notre Dame donated their massive one-hundred year old organ that was then refurbished locally and installed in the new church. The Eucharistic Chapel of the new church incorporated a stained glass window that was removed from the 1903 church, connecting the new with the old. Today St. Mary Our Mother Parish is home to over 1400 families who treasure the rich history of their church, celebrate the present, and look forward to a vibrant future.